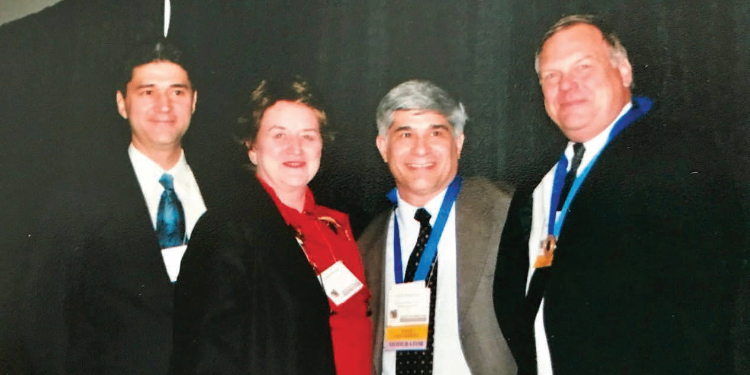 Beloved WAS Home Office Manager and Director Juliette Massey, who served in that role for twenty years between 1987 and 2007, has passed away. The Society began to mature during the years when she managed the Home Office. Affiliated societies and chapters were created, there were combined meetings with other societies, the newsletter became the magazine and the WAS book series was established. The Home Office was the location of the WAS library and where mid-year board meetings were held. For her work and dedication to WAS, Juliette earned the Exemplary Service Gold Medal in 2004.

Long-time co-worker Carol Mendoza, who succeeded Juliette as Home Office Director upon her retirement, said “We became fast friends as if we had known each other all our lives, that’s just how Juliette was. She was quick-witted as well. On our very long plane ride to Bangkok, she was in the middle seat when all of a sudden she unbuckled her seat belt and stood up. I asked where she was going and she said, without missing a beat, ‘I’m getting off!’ She loved WAS and the people of WAS.”

John Cooksey, current Executive Director, who joined WAS in 1996, remembers when he started with WAS “Juliette was so welcoming and helpful with only the Society’s best interest in mind. She was always so supportive and willing to do anything to help the Society to be the best it could be. Besides the work, she was a good friend and always delightful to be with.”
Past-president (1995-1996) George Chamberlain provided this detailed remembrance:

“To understand the context of Juliette’s position as WAS Home Office Manager, the WAS staff during those early years consisted of only three people: Juliette, Cynthia, and Carol (see photo). Before John Cooksey joined WAS, it was the responsibility of each president to organize the annual conference that fell during his/her term. This was an extraordinary task that required coordination with co-hosting organizations and skills in budgeting, hotel room blocks, food and beverage, conference program, exhibitor terms, sponsors, advertisers, etc.

Juliette was the primary source of corporate memory from one President to the next, so we relied heavily on her for advice and support. She was also the one who shouldered the workload associated with new chapters, working groups, international events and other initiatives. Juliette inevitably spent hours on the phone with each President, but she also treated each individual WAS member as if he/she was part of her family. She deeply cared and was like a mother to us all in the most endearing sense of the word. It was only her counsel and untiring dedication that kept all the pieces of the Society running smoothly during those formative years. Thank you, Juliette