Leptin is a pleiotropic hormone that is known for regulating appetite and metabolism, and it has been implicated in many other facets of vertebrate physiology. While mammalian leptin elicits anorexigenic effects and acts as an adipostat, research on teleost leptins show varying responses to feed consumption and the hormone is primarily produced in the liver. Most fishes have only one leptin receptor (LepR/LepRA1), however, paralogs have recently been documented in a few species. We revealed a second leptin receptor (LepRA2) in rainbow trout that is 77% similar to trout lepra1, and the levels of these receptors are differentially expressed across tissues and during fasting, suggesting there are paralog- and tissue-specific functions.

To further understand how leptin and its receptors might function to regulate growth and energy utilization in rainbow trout, we used CRISPR/Cas9 genome editing to disrupt the leptin receptor genes. Triplicate tanks 150-L tanks (3 WT and 3 Mutant tanks) were stocked with 8-10 rainbow trout (145.9 ± 3.1 g mean body weight, BW). Fish were provided 2/3 ration of feed at 1.25% BW with automatic feeders, after which the fish were hand fed to satiation daily and were sampled at three and six weeks. LepR mutants exhibited a hyperphagic phenotype, which led to heavier body weight, faster specific growth rate, increased viscero- and hepatosomatic indices, and greater condition factor (Figure 1). Muscle glycogen, plasma leptin, and leptin transcripts (lepa1) were elevated in LepR mutant fish. A range of hypothalamic genes involved in feed regulation were measured (agrp, npy, orexin, cart-1, cart-2, pomc-a1, pomc-b). No differences were detected between WT and mutants except for pomc-b, where levels were over 7-fold higher in LepR mutant fish at 3 weeks. This suggests that leptin signaling in the brain is likely mediated in part through pomc-b. All detectable fatty acids (FA) were higher in muscle of fed fish mutant fish compared to WT, albeit not significant. However, fasted mutants exhibited significantly lower muscle FA for virtually all FAs, suggesting an increase in FA mobilization during fasting in LepR mutants. These data demonstrate a key role for leptin signaling in lipid and energy mobilization in a teleost fish. Leptin clearly plays a key role in food intake in rainbow trout, however, additional studies are needed on adipose- and glucoregulatory pathways to help better understand the phenotype of the LepR deficiency. 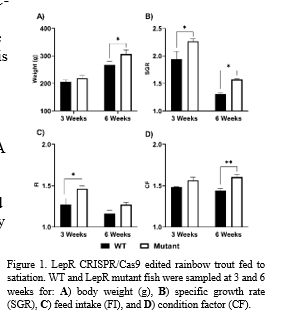