The use of steroid hormones as biomarkers provides a snapshot of physiologies indicative of stress or reproductive status. However, in fish, sampling tends to be invasive, utilizing blood or tissue samples that are difficult to collect and stressful for all involved. Fish mucus, a complex material that contains a broad range of small molecules, is an option for steroid hormone measurements. The primary goal of this study is to define mucus as an appropriate matrix for the measurement of steroid hormones. Mucus was collected from both male (n = 13) and female sexually mature North American (NA) Atlantic salmon through absorption onto filter paper. Females were sampled before ovulation (n= 5) and after ovulation (n = 7). All samples were subjected to a methanol crash and analyzed with a liquid chromatography tandem mass spectrometry (LC-MS/MS) method.

These data validate the use of skin mucus as an appropriate matrix for steroid hormone analysis. They also suggest an important role for glucocorticoids during ovulation in NA Atlantic salmon. These initial studies provide a basis for the future analysis of fish reproductive endocrinology using skin mucus and LC-MS/MS technologies. 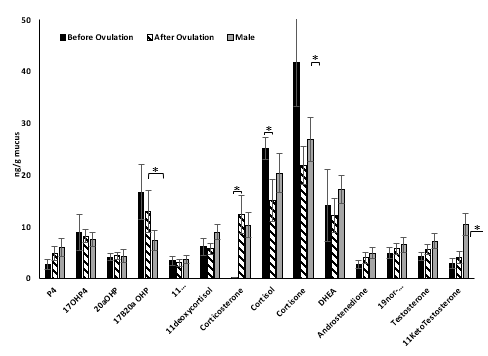