TO WHAT EXTENT DO ‘HIGH’ WATER TEMPERATURES AFFECT THE PHYSIOLOGY OF ATLANTIC SALMON?

Memorial University of Newfoundland and Labrador,


Increases in average water temperatures and decreases in water oxygen levels (hypoxia), and more frequent and extreme warmin g events (i.e., heat waves), are occurring with climate change. Thus, there is an urgent need to understand the effects of prolonged

and short-term warming on the physiology of cultured fishes, including Atlantic salmon ( Salmo salar). This is particularly true with regard to Tasmania and  Atlantic  Canada where water temperatures have approached or  exceeded 20°C, in combination with hyp oxia, and  negative effects on production and fish health ( including large-scale mortalities) have been reported.

Over the past few years, we have used a  multilevel (e.g.,

In this presentation,  we  will  show that  while stress gene expression in salmon begins to be affected at 16°C, and feeding decreases dramatically as temperatures approach 20°C, there is little/n o evidence that this temperature, even when  prolonged or combined with moderate hypoxia, results in mortalities .  The salmon’s capacity to mount an innate immune response is not compromised at these temperatures and

plasma cortisol levels (indicative of a secondary stress response) do not increase until 21-22°C .  Finally, in lab-based experiments, mortalities only begin when the fish reached

Through this research, we have also been able to identify epigenetic and genomic markers of temperature and hypoxia tolerance in salmon (e.g. Figure 1), and have identified populations/ families of salmon that have critical thermal  maximum (CTMAX) and ITMAX

values of ~28°C and 25°C, re spectively. This should assist in the development genetic and other markers for use in selecting fish  that are more tolerant of these conditions and for evaluating fish health . 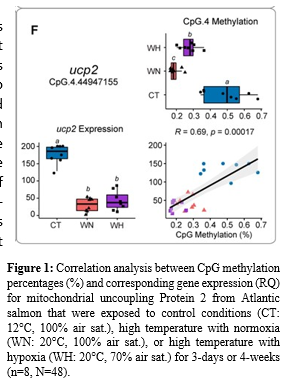