Memorial University of Newfoundland and Labrador,


Salmon reared in sea-cages in Atlantic Canada experience a large range of temperatures during grow out (0-19°C), and the extremes of this temperature range may be stressful for the fish. The effects of high temperatures on Atlantic salmon are being actively researched given the current, and predicted, effects of climate change. However, climate change is also resulting in more ‘cold shocks’, and there are sparse data on the effects of cold temperatures (< 2oC) on salmon physiology, health and welfare.

Commercially reared smolts (~175 g) of St.  John River (New Brunswick, Canada) origin were separated into 8 tanks (2 groups x 4 tanks; 35 fish per tank). The first group was the control group, and was kept at 8°C. The second (experimental) group was exposed to a decline in temperature of 1°C week--1 from 8 to 1°C, and then held at this temperature for an additional week (see Fig. 1). This temperature regimen mimicked the typical seasonal decrease in temperatures at sea-cage sites in Newfoundland. Photoperiod was 12h light: 12 h dark, and the fish were offered feed twice daily until apparent satiation. Plasma and liver samples were taken from 2 fish per tank after 1 week at 8, 6, 5, 4, 3, 2 and 1°C, and after 2 weeks at 1oC. Fish morphometrics (incl. HSI; hepatosomatic index) and feed consumption (FC) were measured over the course of the experiment, and blood (plasma) samples were analyzed for enzymes associated with tissue damage, ion and metabolite levels, and for stress indicators.

The salmon fed less starting at 6°C, and FC was only 10% of that at 8oC at 1-2oC. During the 2 weeks at 1°C, 5% of the fish died, and many of the fish had elevated values of HSI (1.57 ± 0.05 compared to 1.16 ± 0.04). However, there were signs that fish health/welfare was impacted before this point. An ionoregulatory disturbance was apparent at 4°C, with cold-exposed fish having lower levels of K+ and higher levels of Na+ and Cl-. However, an increase in plasma cortisol levels was only observed 1oC (18 ng mL-1), there was no increase in plasma lactate (i.e., no indication of the onset of anaerobic metabolism), and none of the plasma levels of enzymes indicative of tissue damage (creatine kinase, aspartate aminotransferase, or lactate dehydrogenase) were elevated. Thus, Atlantic salmon show changes in appetite and physiology beginning at 6 and 4°C, respectively, and stress, mortality and other signs of compromised health are apparent with even short-term exposure to cold temperatures. Clearly, even short periods of exposure to temperatures < 1oC pose a unique challenge to growers of Atlantic salmon in regions that experience these low water temperatures. 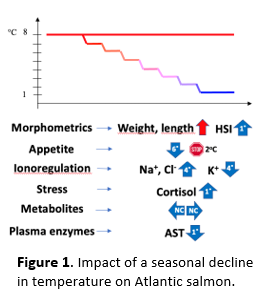