at or beyond that seen in wild and farmed salmon,

time-matched  measurements of routine (RMR), maximum (MMR) and hypoxic respiratory performance  with sham-injected salmon. While blood hemoglobin concentration and hematocrit decreased modestly at week 4 post-infection in sockeye and at weeks 1 and 9 in Atlantic

salmon , these  modest changes were not sustained at week 9 in sockeye or at week 18 in Atlantic salmon .  However, neither RMR ,  MMR nor hypoxia tolerance of PRV-infected  salmon  were significantly different from  their  time-matched controls, except MMR was  significantly higher in infected Atlantic 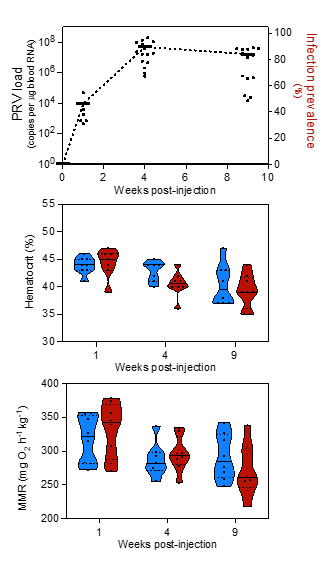