This study examined the growth and hematological characteristics of Clarias gariepinus juveniles fed diets with varying levels of fermented cassava (Manihot esculenta) peel (Fig.1) fortified with Leucaena leucocephala leaf meal (CPLM), for a period of 10 weeks in the laboratory. Fish feed accounts for at least 60% of the total cost of production. This has motivated the research for local, cheap feed material or wastes, as alternative energy feed for Clarias gariepinus, with the aim of reducing the cost of production, without compromising fish quality. Cassava peel as a cheap carbohydrate source has been found to be capable of supplying adequate calories to Clarias gariepinus fingerlings/ juvenile, with improved protein value, through fermentation with biomass from organic sources.

Six iso-caloric and iso-nitrogenous diets were formulated containing 0%, 30%, 40%, 50%, 60% and 70% CPLM replacing maize (diets D0, D30, D40, D50, D60 and D70). The juvenile C. gariepinus (mean average individual weight of 6.31mg ±0.23) fish were randomly distributed in groups of 15 fish per bowl of water, in triplicate for each treatment, in the laboratory, fed daily at 5% body weight in two rations, for a period of 8weeks. Water temperature was maintained at between 25-27oC, pH was alkaline (7.9) while dissolved oxygen was close to air saturation (5.6mg/L). The physiological effect of the diets showed that there was significant decrease (P<0.05) in the PCV, RBC, Hb of the fish respectively as the level of the CPLM level in the diet increased, while the WBC and lymphocytes  increased (Table 1). The fish fed diet D50 had the highest values of MCH and MCV (47.00 pg and 160.00 fl) respectively. The sugar degrading enzyme activities from the gut of catfish also increased with increase in CPLM inclusion (Table 2).

The substitution of maize with CPLM, as energy source, beyond the optimum value of 50% elicited poor growth and physiological responses. 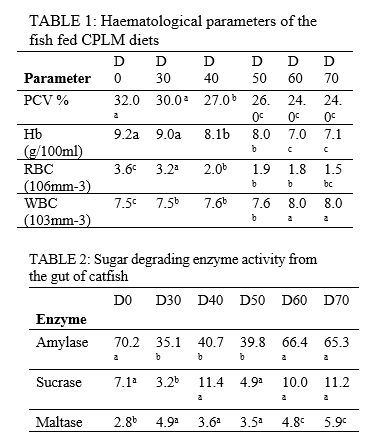