Sterile triploids have been assessed for use in Norwegian Atlantic salmon farms, but their performance in seawater remains variable compared to diploid salmon. Here, we compare the performance of diploid and triploid post-smolts for 12 weeks following the expected time of smoltification in order to determine whether triploids have similar salinity optima as diploids. Underyearling diploid and triploid smolts were either maintained on freshwater (0 ppt) or had the water inflow changed to 11, 23, or 35 ppt (n = 142 / ploidy / salinity) and reared under continuous light at 12°C for 12 weeks. We assessed growth and smoltification markers as well as vertebral deformities and cataracts for which triploids are known to be more prone to than diploids. At the start of the experiment, the triploids were larger than diploids (mean weight (g); 88 ± 0.5 vs 72 ± 0.5). Molecular smoltification markers suggested triploids developed seawater readiness slightly earlier than diploids whereas growth at the different salinities may indicate differences in salinity optima. For example, final body weights were positively associated with salinity in diploids (final mean weight (g) ± SE; 260 ± 5, 305 ± 5, 314 ± 6, 337 ± 6 for 0, 11, 23, and 35 ppt, respectively), but not in triploids (final mean weight (g) ± SE; 329 ± 6, 358 ± 6, 423 ± 8, 413 ± 7 for 0, 11, 23, and 35 ppt, respectively). Cataract scores were not related to salinity, but were generally higher in triploids compared to diploids (mean ± 95% CI; 2.8 ± 0.2 vs 1.9 ± 0.2, respectively). Plasma ions and vertebral deformities are currently being assessed. In brief, early indications are that ploidy effects salinity optima that may impact on long-term seawater grow-out. 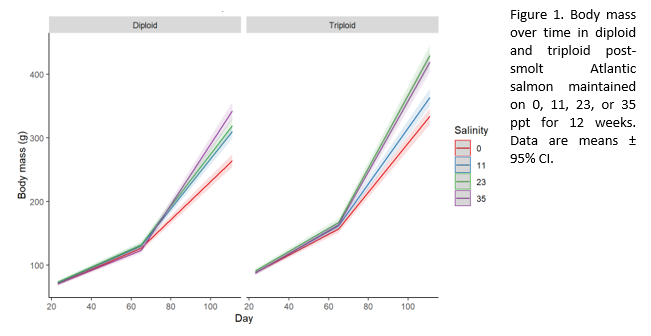