Each year, Quebec marine farmers produce grossly 350 tons, for a total worth of 2 millions CAD$. Like many other marine farmers, they have to conduct their activities notwitstanding the many invasive biofouling organisms that colonize every year their structures. As of today, these community of organisms were solely viewed as a loss of gross profit due to cleaning costs and competition on their collectors. This project, ending in winter 2020, aimed to explore potential avenues of valorization for two of those biofouling species : blue mussel spat and skeleton shrimp. The project also shed light on the potential of a third group of organisms, the hydrozoan. This potential was later studied on three angles : the ease of collection for the marine farmer, the density found on the farming line and finally the nutritionnal content.

As space is the most limiting factor to implement new pieces of machinery on mussel farming boat, the experiment team  developped the most efficient way to collect them without further handicap the limited space. The biofouling densities and species composition was not found to be consistent on the experimental mussel farming line and did not show significant correlation between the depth onto the collector and the biomasses found. Great potential have been observed in the nutritive content of the three groups of organisms, with high concentration of proteins and calcium, which we found could be of great interrest to incorporate in livestock feed. 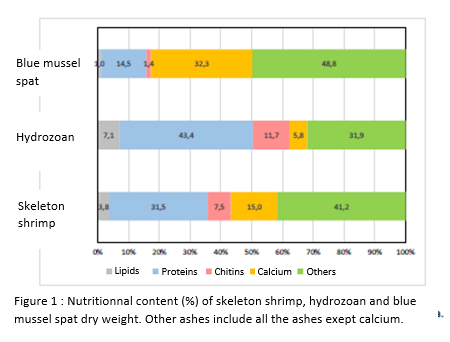