Even though the COVID situation in Singapore is improving quite a lot, there is still much uncertainty for the near future for large events. Therefore we have postponed World Aquaculture 2020 until December 5-8, 2021 in Singapore. We are also shortening the event to 3 days instead of 4 days. We feel this will give a better opportunity for more people to participate in WA2020.

WORLD AQUACULTURE 2020 will be held in Singapore with involvement from countries throughout the Asian-Pacific region and around the world. Aquaculture is rapidly growing in the Asian-Pacific region and increasingly being integrated into the Singapore food systems; therefore 2020 is the perfect time for the world aquaculture community to focus on Singapore..

A major international trade show at WORLD AQUACULTURE 2020 is the place to learn about the latest aquaculture technologies presented by exhibitors from around the world. 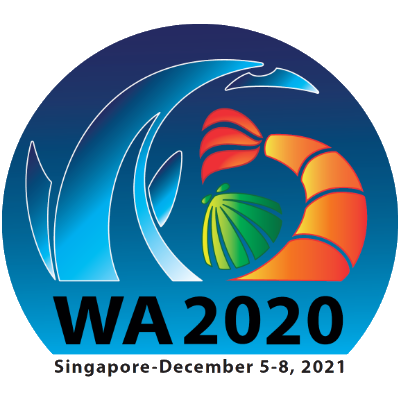 Next Generation Aquaculture: Innovation and Sustainability will Feed the World

Minister for Sustainability and the Environment , Republic of Singapore

Ms Grace Fu graduated with a Bachelor of Accountancy (Honours), and subsequently obtained a Masters of Business Administration from the National University of Singapore. She began her career in 1985 with the Overseas Union Bank, and later with the Haw Par Group, in the areas of corporate planning, financial controls and business development.

Ms Fu joined the PSA Corporation in 1995, and took on different responsibilities in finance and marketing. She held the position of Chief Executive Officer, PSA South East Asia and Japan, where she was responsible for the business performance of PSA’s flagship terminals in Singapore, Thailand, Brunei and Japan.

Ms Fu was elected as a Member of Parliament in June 2006 for the Group Representation Constituency of Jurong, Yuhua Division. She contested and won her seat in the Yuhua Single-Member Constituency in the 2011, 2015 and 2020 General Elections.

In July 2020, Ms Fu was appointed Minister for Sustainability and the Environment.

Ms Fu is a member of the Central Executive Committee of the People’s Action Party and holds the appointment of Organising Secretary.

Dr. Matthias Halwart heads the Aquaculture Branch of the FAO Fisheries and Aquaculture Department and oversees the implementation and development of its work programme. He serves as Technical Secretary of the intergovernmental FAO Committee on Fisheries (COFI) Sub-Committee on Aquaculture and Secretary of the Intergovernmental Technical Working Group on Aquatic Genetic Resources of the FAO Commission on Genetic Resources for Food and Agriculture. Prior to this, Dr. Halwart worked as Senior Programme Coordinator of FAO’s cross-cutting Sustainable Agriculture, Forestry and Fisheries Programme and as Delivery Manager of FAO’s corporate Major Area of Work on Efficient Resource Use. During his professional career, Dr. Halwart has covered a broad range of subjects predominantly in the fields of general aquaculture development, farming systems, biodiversity conservation and sustainable use, and integrated agriculture-aquaculture where he also obtained his PhD. Over the past decades, Dr. Halwart has supported aquaculture development through many projects, mainly in Asia and Africa, and through his strategic contributions shaping the aquaculture pillar of FAO’s Blue Growth Initiative. His professional achievements include numerous publications as well as coordination of major studies and reviews on topics such as aquaculture in rice-based farming systems, global and regional cage aquaculture, and the State of the World’s Aquatic Genetic Resources for Food and Agriculture. He is the aquaculture subject editor of the journal Nature Conservation. For his dedication and commitment to participatory and non-formal education, as in Farmer Field Schools, Dr. Halwart has been awarded the Gold Medal of the Asian Fisheries Society.

WORLD AQUACULTURE 2020
We are more than happy to help facilitate your accommodation and transport needs. Special arrangements can be made to provide complimentary shuttle bus services from your hotel* to Singapore EXPO.

To Book The Hotel

For World Aquaculture 2020 we have partnered with Singapore Airlines to provide special rates for traveling to Singapore. Use the link below and enter the promo code of WA2020.

We are more than happy to announce the tours available as part of this meeting. You can register for any of these tours as part of your meeting registration.